In this article, we’ll discuss about the below mentioned best practices to write and design Apex Code in Salesforce:

It is the best practice when working with a bulk of data records to handle and process similar sets of record together at the same time with a single API request. In simple terms, a set of the same type of records, which are to undergo same process should be handled in the same API. This will result in minimized API requests, saving from governor limit, improved API performance, better bandwidth usage, shifting computing load to a better cloud environment.

The above-written code only handles the first record in the “Trigger.new” collection because of the syntax Trigger.new[0]

In the above example, Trigger.new collection is within the ‘for loop’. Now 200 records can be processed properly.

2. Avoid SOQL Queries or DML Statements inside ‘FOR Loops’ :

In the above example, we’ve seen how ‘For’ loop handles multiple records in bulk. When SOQL queries and DML statements are placed inside a ‘for loop’, these are invoked for every iteration of the loop. Because of this, governor limits will be reached, so it would be best to avoid these scenarios whenever possible.

Example of Code with SOQL Query and DML Statement inside for loop:

To avoid it, best is to execute these SOQL queries, to retrieve the data in bulk, before executing the ‘for loop’.

Render all the necessary data in a list and iterate over the results. When you want to modify the data, retrieve the data into a list and invoke your DML once on that list.

Example of Code with SOQL Query and DML Statement outside for loop:

In the above example, the ‘RecordTypeId’ for an account is compared against a hardcoded value. If the ID changes in the production, this trigger will fail. Such scenarios should be avoided. 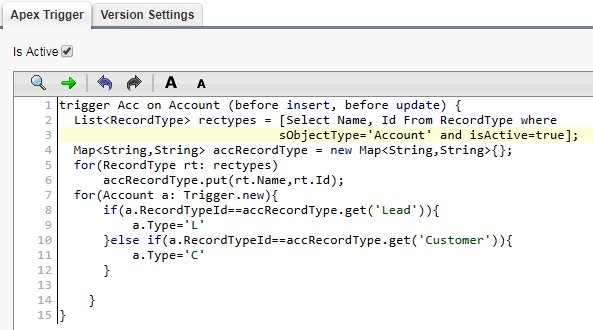 In correction to the earlier example, in this code, we are executing query to fetch the ‘RecordTypes’ name and ID dynamically using SOQL query, and the record type for accounts to be processed will be checked against these ‘RecordType’ removing any scope of error due to ID mismatch in the production and sandbox environment.

The following results can be achieved by incorporating the above principles:

Now, you can easily integrate Salesforce CRM with your back-end ERP system and automate your business process!