How to Create Sharing Rules in Salesforce | APPSeCONNECT

How to Create Sharing Rules in Salesforce

When you want to share a record with multiple users who are connected by horizontal hierarchy, then we use Sharing rules. Sharing rules are only used to extend the access provided based on the permission given by the record owner. They cannot restrict the access provided by OWD or Role hierarchy. Record access can be granted to public groups, roles, roles & subordinates and portal roles based on the permission provided by the record owner.

Every sharing rule has three components-

A record can be shared based on the ownership of a record or meeting certain criteria. We can only share the records of a particular user with other users. We can also share a record based on a field value in the record.

We can provide access based on the requirement. It can be Read-only or Read and write access.

Create a public Group with the users who require similar access.

Steps to Create a Public Group

1. Navigate to Setup -> Administer -> Manage Users -> Public Groups
2. Click on ‘New’ Button. You’ll be navigated to the below screen 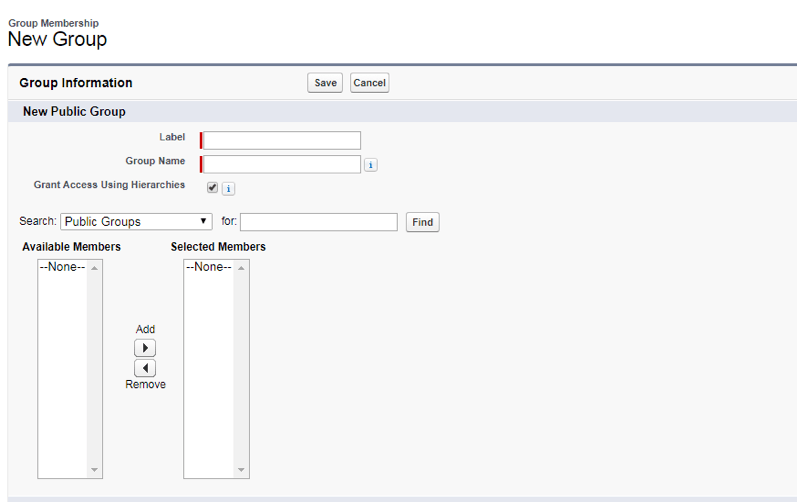 3. Provide Label, I’m giving as ‘Group1’.
4. In the search pick list, you have to select the type of users whom you want to add to the public group. 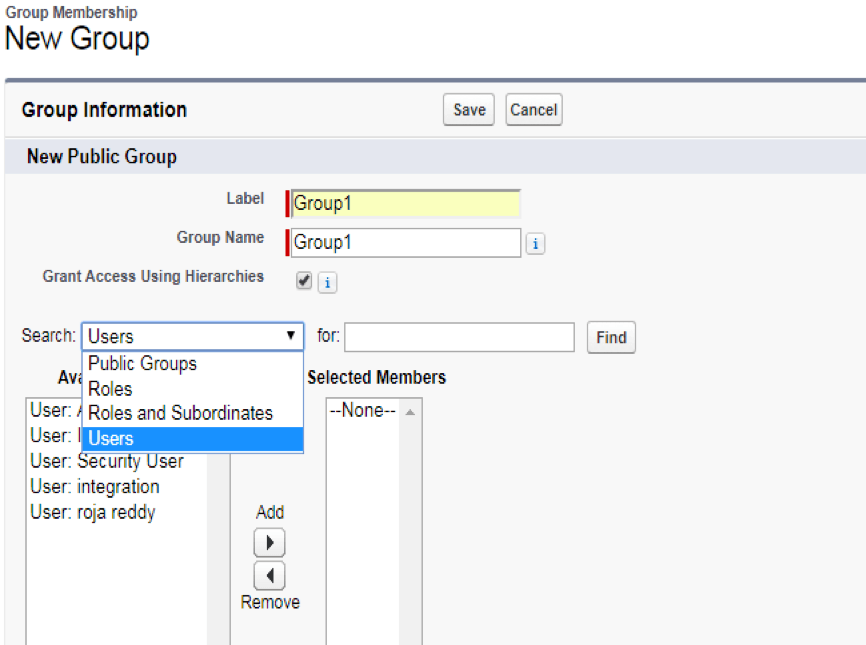 5. Here, I’ve selected ‘Users’. The list of existing users is shown in the Available Members as given above.

6. As I’m using developer edition, there are only a few users. Select the users you want to add to the public group and click on Save button. I’ve selected 3 users from the above list and clicked on ‘Save’ button. 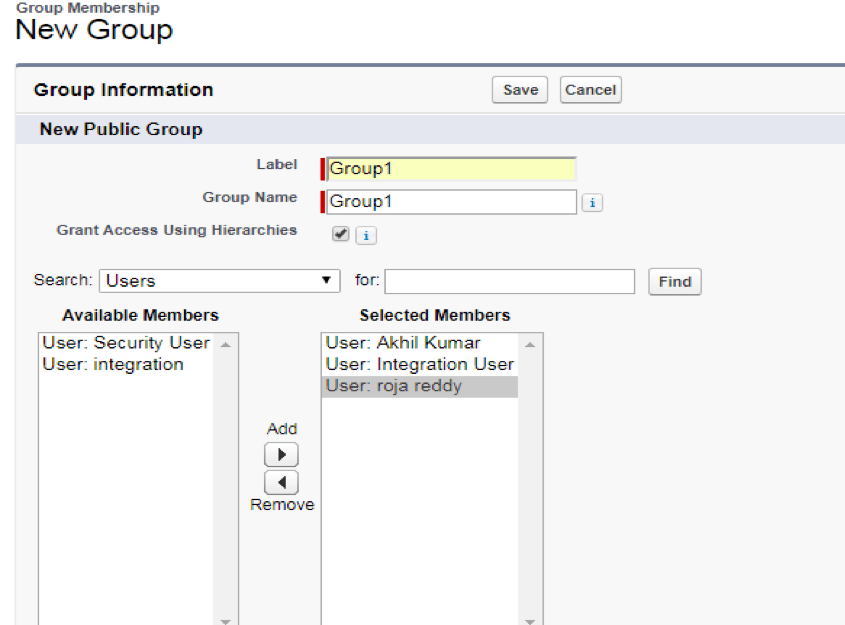 7. Now, a new public group is created with the name ’Group1’.

1. Navigate to Setup -> Security Controls -> Sharing Settings. Below screen will be shown.

2. There you can find a picklist ‘Manage Sharing Settings for’, which contains the list of objects existing in Salesforce.
3. Select an object from the picklist. I’ve selected the ‘Accounts’ object. After selecting the object, you’ll be navigated to below screen.

4. Click on the ‘New’ button. You’ll be navigated to below screen where you need to provide the details of sharing rule 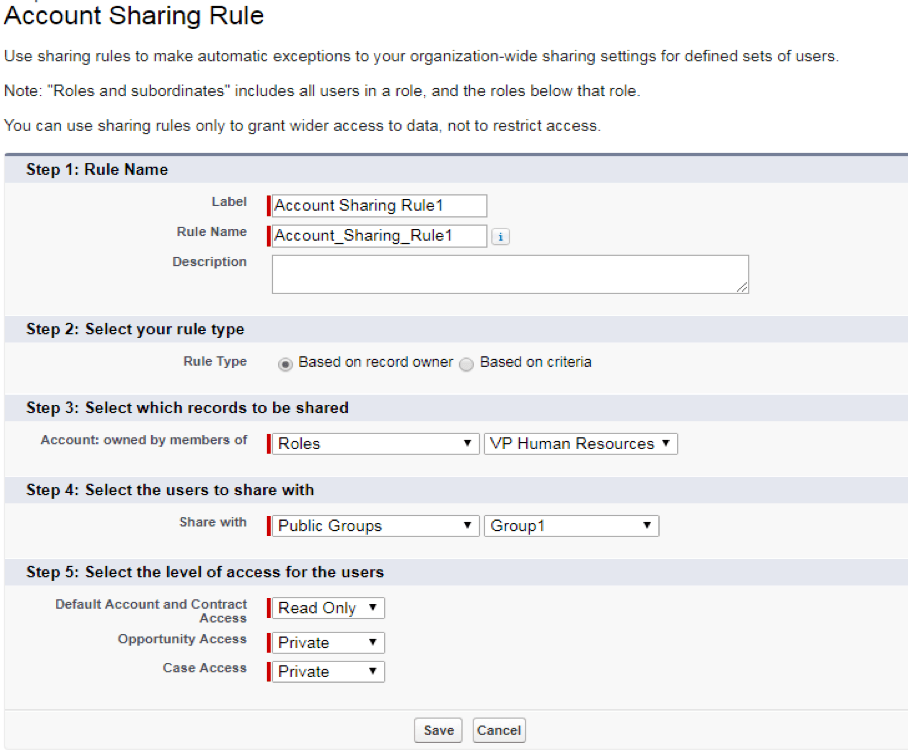 5. In step 1, I’ve given the Name as ‘Account Sharing Rule1’.
6. In step 2, select the type of rule. Here, we need to select the criteria based on which we need to share the record. I’m selecting the rule as ‘Based on Record Owner’.

7. In step 3, select the members whose records need to be shared. It’s a picklist which contains the group of users. 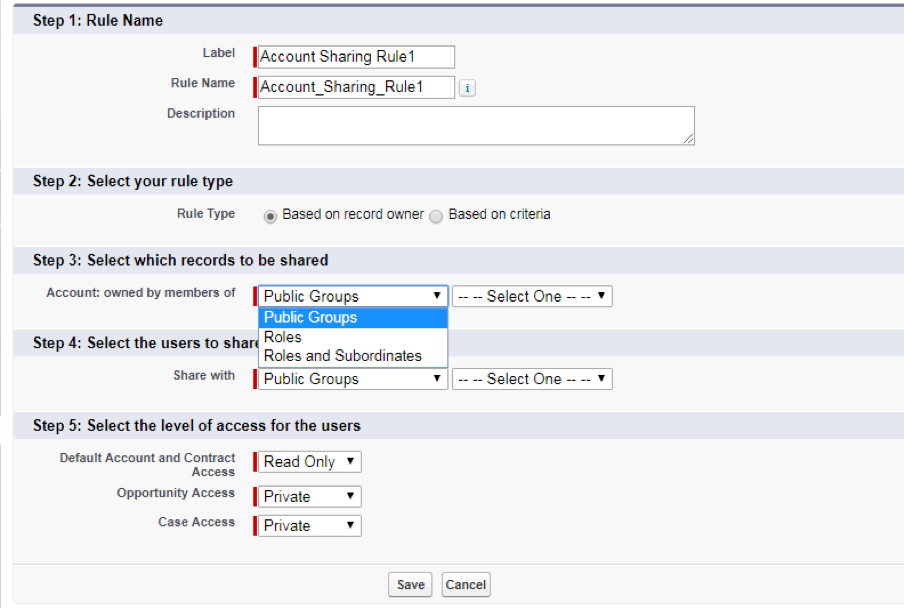 8. I’ve selected ‘Role’ then the list of roles will be displayed in the picklist next to this picklist. I’ve selected ‘VP Human Resources’.
9. In step 4, select the users with whom you want to share the records. I’m selecting the public group ‘Group1’ which is created above.
10. In step 5, select the level of access for the users selected in step5. You can give Read only/ Read/Write access on ‘Default Account and Contract Access’. You can give Private/Read-only/Read/Write on ‘Opportunity and Case’ objects.
11. Provide the required access and click on the ‘Save’ button. You’ll be navigated to below screen.

12. In the above screen, you can see the sharing rule which is created in the above steps.

Salesforce doesn’t allow the creation of sharing rules on all objects. Below table shows the objects on which sharing rules are allowed:

Now, you can easily integrate your Salesforce CRM with the back-end ERP system to automate the business process!